Turkish law enforcement and the drowned Syrian migrant toddler: a depiction of world’s approach to migrant crisis – Save them after they die. 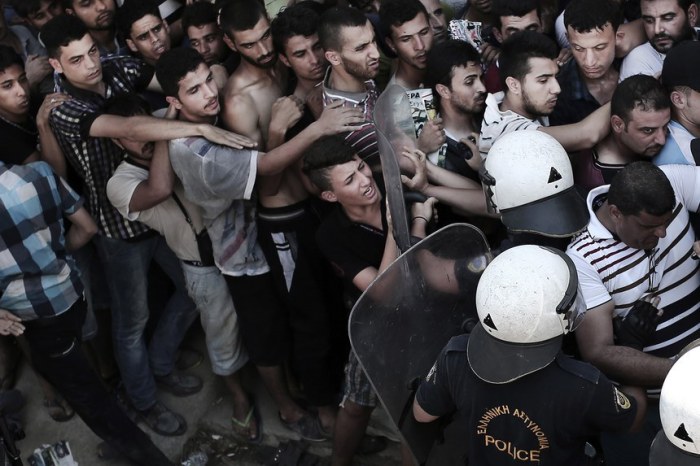 A policeman (2nd-R) pushes a migrant as hundreds wait to complete a registration procedure by the police at a stadium on the Greek island of Kos on August 12, 2015. Tensions on the tourist island are high with its mayor claiming there were 7,000 migrants stranded on Kos, which has a population of only 30,000 people. A Kos police officer was suspended on August 10 after being filmed slapping and shoving migrants queueing outside the local police station as they waited to be documented so they could go on to Athens. The UN refugee agency’s division for Europe said 124,000 refugees and migrants have landed in Greece since the beginning of the year. AFP PHOTO / ANGELOS TZORTZINIS (Photo credit should read ANGELOS TZORTZINIS/AFP/Getty Images)

On May 13, 2014, 301 miners lost their lives because of a tragic accident took place in a coal mine in Eynez region of Soma province. Then prime minister Erdogan visited the town however he faced protests in the town. This shot was taken when Mr. Erdogan’s aide Yusuf Yerkel was beating one of the miners after he was taken down by security forces.